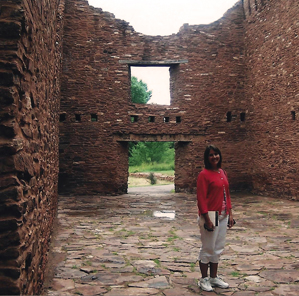 This trio of abandoned pueblos/missions in central New Mexico is—according to modern modes of transportation—off the beaten path. But in its heyday, everyone got around on foot. Although the area was temporarily resettled in the 1800s, the majority of occupants left the area prior to the Pueblo Revolt of 1680.

The National Park Service adds this bit of trivia:

“The caravan that supplied the missions only arrived every three years. Included in one year’s shipment was 45 gallons of sacramental wine, 42 pounds of prepared candle wax, and 26 gallons of lamp oil for illuminating the altar.”

If you knew supplies would be replenished only once every three years, what would you ask for?

Personally, I would want soft cotton socks and comfortable shoes. And while there are plenty of modern conveniences I am now used to (hello Internet),what would I need in the 17th Century that could not be found in nature? Want a fluffy pillow? Find some feathers. A good book? Even if I could read back then, I wonder if there would have been time for leisurely activities. After all, to get that fluffy pillow would require collecting feathers, cleaning them, weaving fabric, sewing a pillow case (making a bone needle, collecting and carding some sort of material for thread), and if the feathers came from domestic birds, add feeding, watering, and doctoring to the list. I know I am forgetting something, and that’s just for a pillow!

When I visit mission ruins, I try to imagine life as it was for the American Indians whose ancient culture was being remodeled after a European way of life. Before contact, any supplies they required would have been homegrown, hunted, or traded, and it wasn’t until they became accustomed to foreign conveniences that these things were desired.

I also try to imagine life for the Franciscans (or in other places and times, Jesuits) who managed the missions. While their physical needs were met with and by the people with whom they lived (local food, regional building supplies, some fabrics, pottery for cooking) their purpose for coming to the New World required religious tools which could only be collected from craftsman far away, such as books, clerical vestments, and objects for the celebration of mass. My guess is a few of these men were probably homesick too.

Hardships accumulated for both the natives and the clergy—European immigrants including successive generations—but as to whether one group suffered more than the other, well … history attests to factions, slavery, and the dismantling of ancient cultures. Although not all things are equal, the introduction of advanced technologies, new animals, and different foods did broaden the scope of knowledge and convenience for the aboriginal whose world was beforehand confined to one continent.

I have traveled thousands of miles overseas and love learning about new cultures, eating different foods, and thinking about two things: What do I give, and what do I take away?

Visiting mission ruins draws me to a different kind of introspection. What can I learn from the past?

I encourage you to visit the Old Spanish Missions, and if you do, you may find yourself asking the same questions. I’d love to hear your answers.