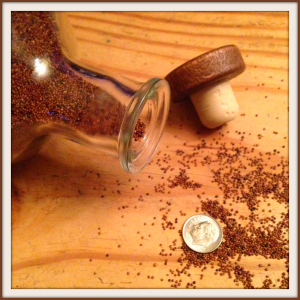 I grew up in the era of TV dinners and rice that cooked in a minute. Literally.

This fare deadened my taste buds for years, so when I discovered how inexpensive and easy it is to prepare food in its natural form, I went gung-ho. Today, my pantry is stocked with dried pinto beans, garbanzos, real rice (in many colors and varieties), dried pepper pods, oatmeal … a genuine cacophony of grains, nuts, and fruits to awaken every flavor from salty to sweet. So when I recently walked into the bulk food section of my grocery store and saw something new, I wondered what in the world the bin contained?

I read the sign and had no idea what language I was reading: kañiwa.

I had to get some.

But when I got home with my sample, I was baffled. I wasn’t entirely sure what I had purchased, let alone how to prepare it. Nothing like saying yes before you know what you’re getting into. However foolhardy my ingrained instincts may be, I was pleasantly surprised to learn this tiny seed is high in protein, iron, antioxidants—and it’s gluten free.

Fine. Now, how is it cooked and what does it taste like? In my opinion, it’s akin to barley–not as strong–and it acts as a base to support whatever flavor additions you care to add. Dried cranberries and pecans? Turkey and corn? How can you know unless you try? 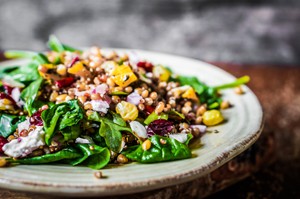 I made it the same way I make rice: a ratio of one part grain to two parts water. It worked! I seasoned it with salt, pepper and butter. Then I read that the flavor is enhanced if the grain is first dry roasted in a hot skillet. I liked it even more. But I made too much and had leftovers. Some I used as a pilaf with pine nuts and mushrooms. Some I mixed cold with corn and tomatoes, tossed it with seasoned oil and vinegar, and scooped it over my lunch salad. I also used some in a pot pie. Then I wondered…

For this batch, made without dry roasting but steamed (like rice), I added a few raisins and cinnamon and poured a little hot applesauce on top. Delicious!

The simplest way to maneuver new grains is to think of the ones you are familiar with and substitute the unfamiliar for the tried and true. Or mix them together. To encourage my family to try something new, I added kañiwa to a pot of stewed tomatoes. But if your finicky eaters fuss, you may ask yourself,

“Because,” she said, with a mouthful of quinoa and cheese stuffed peppers,”it’s like being an explorer in the comfort of your own home.”

Kañiwa is indigenous to South America. Peru. Bolivia. Resistant to frost and drought. It has been said that Inca royalty favored this seed so much that they forbade commoners to eat it. (For more information, you may want to read The Lost Crops of the Incas by The National Research Counsel. A downloadable, free PDF is available at the National Academies Press:

If not kañiwa, eat something you have never eaten before. Let me know what you have discovered. I may have to try it too!