Imagine yourself far away from home, across the ocean far, lost in an unexplored land, surrounded by animals you’ve never seen or could imagine (and they’re big, like bison big), and following a guide your gut tells you not to trust.

This is exactly what happened in 1541 to the company on Vasquez de Coronado’s exploration of the New World. What we call the Texas Panhandle, they called uncharted. Even so, they followed their guide, a Proto Pawnee Indian the Spaniards dubbed ‘The Turk.’

What else could they do?

With supplies running low, some soldiers withdrew from the camp in search of food, and at least one man was never seen again. It wasn’t until the group met Teya Indians who said the expedition was going in the wrong direction that Vasquez de Coronado discharged The Turk for another guide, the Proto Wichita Indian named Ysopete. After this, the expedition divided, some going to what is now Kansas, and the rest returning to what is now New Mexico. As for The Turk, well, his direction went decidedly south… if you get my meaning.

While I haven’t been in quite as desperate a situation, I have been lost—once when I was very young. Sears and Roebuck. Following pants I thought were on my mother’s legs. Turns out the pants belonged to someone I did not know. My heart stopped. I called my mother’s name. “Mom!” Several women looked down, but none was my mom. Next thing I knew I was corralled behind a counter, given a choice of one chocolate, and heard my name announced in the store’s sound system, “Would Amy’s mother please come to the candy counter?” 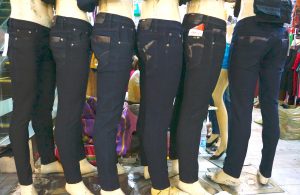 Someone was looking out for me.

The other moms in the store, the store clerks, and my guardian angel Lydia—so named just for convenience you understand—looked out for me then. And since I have this ministering angel, I still am “looked out for” today.

When the icy road makes my car swerve before traffic and I am unscathed, “Thanks Lydia.”

When in a hurry I slip down the stairs and do NOT twist an ankle, “Thanks Lydia.”

But really, even Lydia is only following marching orders.

Just as no one in Coronado’s muster could leave the trail unless given permission, my route is watched over and bordered by love. This love protects me from succumbing to despair or wishing I was on another path. Life is so much easier when I don’t pressure myself to follow somebody else’s way. Nope. That’s their street. That’s their direction. Not better than mine. Not worse. Simply theirs.

My path is sometimes a wide swath of comfortable pace, and other times it’s tangled and steep and scary. Yet if my determination to stay on my own path is thwarted by jealousy or comparison, you know, that someone else’s street is nicer than mine, I have to remind myself that the borders are there for my freedom to make it safe to explore without fear of getting lost. But let me tell you, the fences are so far apart that there is more than enough room to grow.

My friend Debbie W. Wilson has written a book which explains what I mean much better than I ever could. and if ever you’re feeling a little lost or fearful, I encourage you to pick up a copy of her book and apply its many truths. It’s called Little Women Big God, and her website is www.DebbieWWilson.com

Was there ever a time when you were lost?

Are you feeling lost now?

Maybe you’ve landed on this page for a reason. Maybe Debbie’s book will help you.

For more information about how Debbie can help, check out Light House Ministries. You’ll be glad you did.