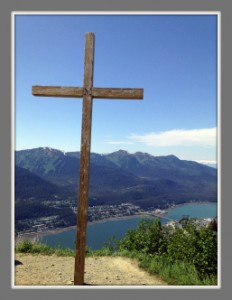 Recently I spent a spectacular week in Alaska while learning story skills from the brilliant founders of Catharsis (StoryCatharsis.com). The classes were amazing. The weather was not what I had expected.

Isn’t Alaska supposed to be cold?

I baked in flannels and sweatshirts because of the 80° heat. But the views were clear, as you can see from the two posted photos.

I could share many stories, but since everybody loves a mystery, I stumbled on a good one.While hiking up to Father Brown’s Cross in Juneau, I wondered: why did he blaze the trail in the first place? And who is Father Brown anyway?

The stats are easy enough to find: Edward Howard Brown, born in Baltimore, MD 1860. Attended Jesuit Loyola College (MD), Georgetown University (D.C.), and College of the Holy Cross (MA). Taught at Georgetown and also for two years at Fordham University. Not surprisingly, he entered the Jesuit Order (at age 19). Eventually, he volunteered for the Rocky Mountain Mission and arrived in Juneau in 1904. The details of Father Brown and his cross are more covert.

And so… the mystery continues.

Who is Thomas P. Wickes?

To find out more about Father Brown, I tracked down a man named Thomas P. Wickes, assistant corporation counsel lawyer for New York City. Born in Albany in 1853, he was only seven years older than Father Brown. As it happened, Mr. Wickes enjoyed hiking in the Adirondacks, and it was he who first laid out the route from St. Hubert trailhead to the 4736′ high Gothics Mountain. (Today, there are many trails that lead to the peak.) Mr. Wickes also, it is believed, is the first European to climb Armstrong Mountain, having completed that feat in 1875.

Now here’s where the trail goes wonky, but bear with me.

Pertinent to Father Brown’s story, Mr. Wickes was indicted for writing “annoying letters” under the name of Lewis Jarvis (NY Times, June 14, 1905). Strange days indeed! He was convicted, his name stricken from the roll of attorneys, and sentenced to remain a year on Blackwell’s Island, the lunatic asylum for the city of New York. After serving seven months, he was paroled on the condition that he “…go west and never return to this city.” (To see the article, click HERE.) It caused quite the hullabaloo, so much so, that Alaska territory was forced to review clemency as part of its constitutional scheme.

The deeper I dug, the richer my reward. Alaska still prompts a rush of sorts!

Even so, I wonder if before leaving for the western frontier, Father Brown may have met the illustrious N.Y. lawyer in person while they both lived on the east coast. If not, they certainly met in Alaska.

This much is certain: Mr. Wickes mountaineering enthusiasm ignited Father Brown’s sense of adventure. In 1906, Mr. Wickes suggested Juneau have its own Trail Association, and the good Father once again volunteered. The trail was completed in June 1908.

Father Brown did place a cross on the pinnacle, but his original cross has been replaced many times.

If you’re interested, Alaska Digital Archives has a picture of Father Brown. He stands with school children in front of the Juneau Parochial School, photo dated 1910.

Something else I learned in Alaska: There is melancholy in the road not taken, but move forward we must. I think Father Brown, having left his eastern roots for the big wild west, took the road less traveled. And I am glad. The view from the peak is glorious.