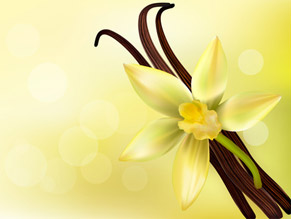 Who hasn’t eaten vanilla ice-cream, vanilla cake, or smelled the comforting fragrance of vanilla candles? The creamy flavor and homey scent evokes many happy memories. But vanilla was not known to most of the world until after the year 1519 and a meeting with the Aztecs.

Spanish conquistador Hernán Cortéz landed in what is now Mexico and attended a Totonac religious ceremony. As he met with Emperor Montezuma, he was offered a drink called Xocohotl, which was a blend of chocolate and vanilla (chocolate was also a mysterious ingredient, but that’s another story).

Cortéz loved the beverage and sent some to the Holy Roman Emperor, Carlos V. As you can imagine, shipping costs in the 16th century were very high, so the beverage became a status symbol for European Aristocrats and Royalty.

Vanilla is a bean that grows from a climbing orchid. Its popularity of fragrance and flavor is coveted worldwide, but the harvest was initially elusive. Even though the vine was reestablished in other countries, the plant would not produce vanilla. The reason for this is the tiny Melipona Bee. This little guy thrives in Mexico and is the only bee that can pollinate the delicate orchid.

Today, vanilla is grown in many tropical regions where the flower is artificially pollinated.

Legends of the origin of vanilla are heartbreaking. Because of the romantic tales, vanilla should be presented to lovers as commonly as chocolate and roses. Here is one such story:

Xanath, the eldest daughter of a nobleman, fell in love with a commoner, an artist named Tzarahuin. They often met in secret and their love blossomed, but Xanath was too beautiful for this world. The Fat God of Happiness longed to make her his bride. When he told of his desire, she defied him to stay with Tzarahuin. In anger, the god killed her, and where her blood spilled, the vanilla vine erupted. Heartbroken, Tzarahuin died at the foot of the plant, but every spring, he returns in the form of a Melipona Bee to kiss her sweet petals and propagate his love.

I’ve heard yummy things about Xanath Ice Cream Store located in the Mission neighborhood of San Francisco, CA. Have you been there? How’s the vanilla ice-cream? Let me know!