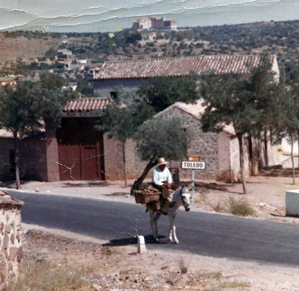 This old photograph, an original “Kodacolor Enlargement” dated December 1965, was taken, as indicated on the sign, in Toledo, and, judging from the landscape, it is Toledo, Spain.

In the hills high above Toledo, Inigo Montoya lived as a boy (his father made stellar swords apparently, and for want of one such blade, he was killed by the six-fingered man of Princess Bride fame). I grew up in Toledo, Ohio, and as a child I never thought about my town’s namesake, but now I realize Spain may be the reason why my hometown’s newspaper is called The Blade.

… the February 2015 edition of Architectural Digest features the Cigarral de Menores, an ancient manor that once housed a monastery for the Congregation of the Clerics Regular Minor. Established in the year 1588, the Adorno Fathers remain active worldwide including places like Africa, India, and the Philippians. The manor is replete with 14th Century plasterwork, 16th Century tiles (salvaged from a local convent), 19th Century pottery, and a modern abstract sculpture made by Martin Chirino. How’s that for “Linking Yesterday to Today?”

The name Toledo is taken from the narration of Roman praetor Marcus Fluvius’s 193BC statement Toletum, ibi parva urbs erat, set loco munita, which roughly translates, “Toledo, A small city that is well fortified,” the fortification being the embrace of the Tagus River all around. (Click HERE for a pretty video of the river’s scenery, and if you are able, make time to click on the Roman praetor’s name to read a spectacular history.)

Did I mention El Greco, renown artist of our day (yet not so much in his own). His painting The Burial of Count Orgaz, along with many others, is in the Santo Tomé Church of Toledo. Senor de Orgaz, who died in 1323, gave generously to religious institutes and to the poor.

Where is the man in the photo going?

His basket is full, so maybe he’s going to a party. Or, inspired by El Greco’s subject, a place where he can share what he has with others. And that’s what I want to do: share two places where you can appease your appetite for more of Spain.

If you have a Pinterest account, this page has lots of Toledo, Spain photos to browse. And if you want to find killer recipes, visit Janet Mendel’s blog (I suddenly feel hungry for sausage and lentils!).

To finish, can you guess where this phrase is from? “To be willing to march into hell for a heavenly cause …” The answer is on my to do list!