What are Little Girls Made Of?

She walks home after school, same as she does every day—takes the same route, knows all the uneven edges on the sidewalk, and sometimes skips, trying to take two sidewalk sections at once. But rarely does she make it past a single section before landing on the crack. She muses, “Step on a crack, break your mother’s back,” stops, and thinks, “What a dumb saying.” Before she can ponder a deeper meaning, she feels her pulse rise. A thundering noise rises behind her. She turns. A loose dog is approaching. Fast.

That little girl was me, probably in the second or third grade. I ran, sure, but the dog ran faster. I screamed, and I think I actually scared the dog. He turned back. My heart still pounding, I watched him go. My legs wobbly, I went home and cried. Sugar and spice and everything nice. I forgave the dog, because, generally, I liked dogs, but I changed my route to another street.

What are Little Boys Made of?

Did someone say puppy dog tails? Not a contemporary description, but one that goes back a ways.The aforementioned rhyme, is attributed to poet Robert Southey, who, it is believed, added the stanzas to an older work, What Folks are Made Of. You can find his rhyme along with many other children’s nursery rhymes at The Project Gutenberg eBook of the Nursery Rhymes of England.

Rewinding back to when I was a little girl, I had a dog I adored. When I came home, he’d wag his tail wildly and almost fall over from the action. His name was Dino. After I married, we got collies. Spirit Boy was a lover boy, and Fred Dingle was a gentle doofus who would plop down with a groan as if to say, “Well, this is as good a spot as any for me to take a nap.” We’ve had other dogs, a Jack Russel Terrier named Frodo, a Cocker Spaniel named Opie (after Mayberry R.F.D., not folklorists Iona and Peter Opie, whose vast collection of children’s literature includes research on the puppy dog tails rhyme), a mutt or two along the way … all of them loveable companions who’d walk in my shadow and curl up by my feet.

So when I consider the history of some breeds, I read and learn with disbelief. But the truth is that some dogs are bred for war. Not dogs that chase little girls for sport, but dogs that tear the neck and gut of their victims. Human victims. 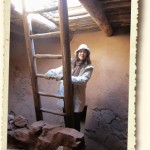 The author in a Pecos Pueblo Kiva Ruin

The first Europeans to meet the Pueblo Indians of Pecos Pueblo, now a ruin near Santa Fe, NM, brought war dogs which they used to subdue and torture a man named Bigotes (long wiskers), and an elder whom they dubbed cacique, or chief.  The reason? They wanted information about a gold bracelet, the thinking being that one piece of jewelry must surely point to a cache of legendary wealth.

Despite the blood and torn flesh dangling from the dogs teeth, no one admitted to knowing anything about a gold bracelet. Those are the facts, but I wonder, were these dogs affectionate with their trainer—worthy of the tag, Man’s Best Friend?

Spanish war dogs were not the only variety of pups, but some were edible, some were full of fluffy hair that could be carded and used like wool yarn for clothing, some were bald. I found an interesting site you may find helpful to expand your knowledge of the doggy universe; Spanish War Dogs led me, at least, on a chase to find more information.

As I write stories, experience drives many descriptions, and truth is braided into fiction, a plait that I hope will instruct and entertain. I guess that’s why it’s called historical fiction.

Slugs and snails, snakes and snails … there are variations to the rhyme that stem from the full length version What Folks are Made Of, including what are soldiers, what are men, what are women and fathers and mothers too, but never are these mentioned: no dogs of war—no dogs of snore—no dogs at all.  No dogs. I wonder what Bigotes and the cacique would have thought of that.