I came as a tourist.

The small chapel that sits on the west side of Mission San Xavier (pronounced San ha-vee-air) del Bac, or as it is affectionately known, the White Dove of the Desert in Tucson, Arizona, is open to the faithful and the curious. I hail from both persuasions.

As I think about it, chapel may be too generous a word to describe what is only a tiny room, a place barely large enough to house, say, a five-piece luxury bath (double sink, toilet, bathtub, separate shower), except that the space is anything but luxurious.

Rustic, yes, humble, without question. It is a memorial.

The building faces the main church and lies at the end of a long courtyard enclosed by adobe walls, studded with empty niches.

I came as a spectator.

Upon entering the chapel, I was hit with a blast of beeswax heat. Hundreds of candles flickered around an altar dressed with plastic flowers, framed photographs, baby shoes, and other memorabilia. Written prayers or requests lay scattered next to the shrine. Plus, there were more little statues of saints than I cared to count.

Despite the heat, interior and exterior, people streamed inside. They knelt, crossed themselves, touched a painted statue of Christ, the flame on his forehead and on his heart, and prayed. They lit more candles and somehow found space (between metal holders, on top of stone pillars, on the dirt floor) to set them.

The people inside the chapel were participants in an ancient ritual. Where did the tradition of lighting votive candles get its start? Christianity began with much persecution, and likely many first services were held in catacombs. Candles were a necessity. The utilitarian need became a sacred rite that continues to this day. The Reverend William P. Saunders, PhD, has done the research. Click here for a brief explanation.

At one point, two men whose beefed up bodies made me think they must be athletes, squeezed inside. They also knelt in prayer. When one of the men could not find a stick to light his votive, a woman standing near the altar gave him hers.

I will light a candle for you.

The day blistered with near noon heat. Mass was being celebrated in the large Mission church, and I listened to a reading from the book of Matthew (chapter 11, verses 25-30) via an outdoor speaker.

“. . . for I am meek and humble of heart; and you will find rest for yourselves.

“My yoke is easy, my burden is light.”

This place, and the people who frequent it, belong to something beyond the natural world.

I found it hard to leave.

I came as a tourist with a camera. I left without taking a single interior photograph. To have tried to embed that atmosphere to an image on a page would have marred the beautiful image it placed in my heart. 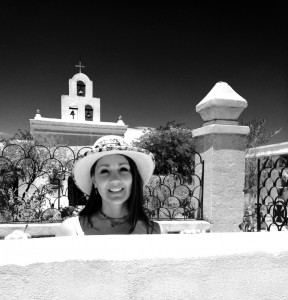