During a recent visit to the Toledo Museum of Art (Toledo, Ohio—not Spain), I spent most of my time in the wing that houses Renaissance art, and, surprisingly, I did not find a portrait of any woman not wearing some sort of headpiece. So I wondered, when did the custom of wearing head coverings begin? And how many forms or styles are there?

Contemporary artist Alfred Russell (1920-2007), whose art immortalized, for example, the Cabeza de Vaca Expedition and Sacajawea guiding the Lewis and Clark Expedition, portrayed Hernando de Soto and his wife Isabella in the year 1539, in which Isabella appears to be wearing a snood. (de Soto was a Spanish explorer in what is now Florida.)

The custom of European women wearing head coverings when out in public may have started in the 8th Century when the Moors conquered Iberia. And since Arab women wore headscarves, the custom prevailed. That’s one theory anyway. But what about before then? Like, two-thousand years before then? Or three-thousand, or four? Did the Queen of Sheba wear a head scarf? No doubt Mesopotamian clothing was utilitarian, yet I believe there’s something spiritual about having a covering too. The Bible, in Genesis 3:21, says that after the Fall, Eve was covered by God . . . hey, I think I’m on to something! 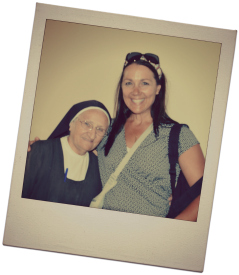 Sister Mary Rose and Me in the Church of the Beatitudes near the Sea of Galilee.

But first, a quick story, something I learned from my Israel tour guide, Arie Bar-David. Two-thousand years ago, fisherman worked long hours, and, like any laborer, they needed rest. All of them had pillows. These pillows were not stuffed with fluff like many today, but their pillows were filled with an extra set of clothing. Mark 5:1-20 tells the story of Jesus and a demoniac—a man possessed with a legion of demons. Jesus told those demons to leave the man, and they did. Verse 15 explains how the former demoniac was then dressed and in his right mind. Arie Bar-David asked our group, “Where did he get the clothes?” The answer became obvious: Jesus gave him his spare set. Symbolically, the man was covered by God.

Here’s what I know: Head coverings are ancient apparel. The Torah (Old Testament), Numbers 5:18, speaks of it, and in the Bible New Testament, 1 Corinthians 11:1-16 mentions this custom. Some argue that it was only a custom of the day, and customs change.

There was a time when all Roman Catholic nuns wore veils, and all Catholic women wore a head covering in church, but this practice is now a choice for most religious communities and women. Even so, it wasn’t that long ago that women and men wore hats to all kinds of functions. Even shopping was a time to dress up. Times have changed!

Before I conclude this short blogpost, let me say that this one topic, head coverings, is vast. One could research fabric (wool, linen), time period (when were lace mantillas introduced?), color (symbolism), type (as listed above), region, and religious views just to name a few.

Since it’s such a heady topic, if there’s something specific you’d like me to research, shoot me an email at amy@amynowak.com and I’ll try to answer in a future post.