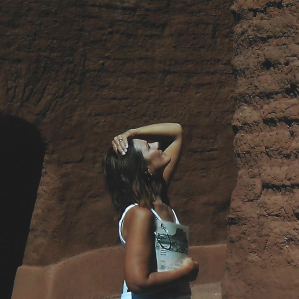 While visiting any Mission ruin, I have to inspect the walls.

The bricks, commonly known as adobe, are made from mud and fibrous organic matter that, if left unprotected, tend to melt back into the earth. Any surface ornamentation of plaster and paint on the walls is usually the first to go. But where faded decorations of scrolls or angels remain, it’s probably just luck that the ceiling timbers were not stolen and used for firewood; the roof has kept the elements at bay. 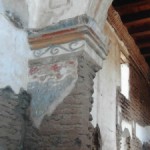 I have wondered by so many cathedrals and temples around the world continue to survive even after thousands of years, while countless North America Spanish Missions have disappeared after only five hundred or so years, sometimes less. Wars certainly had something to do with their demise, including the Mexican War for Independence from Spain. After the war was won in 1821, the Missions became Mexican government property and were used however they deemed necessary. Some, for example, were turned into schools, jails, and courthouses, while others were sold simply for the land on which they sat.

And that makes me sad.

Think of the history lost!

In a house, walls hold more than a ceiling; they absorb voices, form perimeters for living areas, and, some people say, they know secrets. Not to be spooky, but I’ve lived in houses with walls that hold secrets.

Well … the paint underneath the paint.

Pictured below is one of my own wall transformations (that for all I know has been covered up by new owners).

To begin, when we moved into that house, every wall was white. I thought it would be cool to paint a feature wall in the dining room, so the first picture is the (first) result: a quote from Zebulon Montgomery Pike (an explorer for whom the Pike’s Peak region in Colorado is named) was stenciled over a mountain scene.

After about six months, my feature wall grew weary–hard on the eyes. So I decided to paint over my masterpiece with a creamy beige. Not being one who knows when to quit, I dipped a feather into a tan color and the result, I thought, was a stroke of genius. I rocked my wrist to achieve an aged look (on the wall–silly–not me). For many years, few people knew the secret of Mr. Pike underneath the art–until now.

Likewise, I encourage you to paint a wall and someday make a secret of your own. Send me a pic of the result!

At the very least, don’t take your walls for granted. 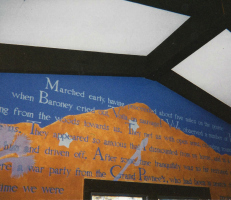 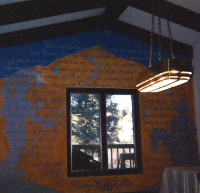 What secret might you find at the crumbling walls of an old Spanish Mission?