Late last year I had the good fortune of visiting the Bosque del Apache National Wildlife Refuge. Standing on a bridge overlooking the cottonwood and willow lined river, I visualized prehistoric hunters whose discovered stone tools were probably used to hunt bison … and mammoth! Nearby, petroglyphs abound that tell mysterious stories of ancient peoples. Where did they live? What did they do? How did they pray?

The river flows through a land that never changes and can never be the same.

In 1598 Don Juan de Oñate and his expedition arrived at the pueblo of Teypana (or Pilabo Pueblo) hungry, tired, and weak. The people of this pueblo, the Piro tribe, cared for him and “more than 100 families, almost 300 single men, numerous wagons, and 7,000 cattle.”

In response he named the pueblo Socorro, a Portuguese-Spanish word that translates “help.”

In 1615, Franciscan priests established a mission in the area. Today, the renovated San Miguel Mission Church in Socorro has an installed glass panel through which portions of the old pueblo can still be seen. Those who worked in the original mission and those who did the renovation most certainly called upon God for socorro.

Throughout history, Christians have used simple hand gesture to symbolize their belief and call for help. Russian artist Vasily Surikov painted The Boyarynya Morozova, in which the central figure gestures with two fingers raised. Is she asking for help? (Click here to read more about this painting).

When life becomes burdened to the point of despair, when a one-word prayer is all we can muster, socorro is enough. 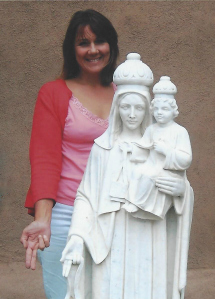 Replicating a hand gesture where two fingers represent the dual nature of Christ (God-Man), and three represents the Father, Son, and Holy Spirit; also used for the Sign of the Cross.

When have you asked God for help? Did things turn out the way you wanted?