I pull weeds, a little snake slithers by, but I don’t think it’s the same snake! So I called Animal Movers to help with a possible infestation. The person who came to my rescue, hereafter dubbed “Hunter,” arrived with loads of information.

First thing I learned is that garter snakes are so named because they are striped, slightly resembling a ladies garter.

Second thing is that garter snakes are creatures of habit. Each one has a favorite spot, and if they are startled and leave, it’s a pretty sure bet they’ll return to their chosen hang-out. Just give them fifteen minutes or so.

Third, when picking up a snake, wear gloves. Self preservation tactics work well for these guys because they emit a foul smell to tell their captors something like, “Hey, I’m dead. Wouldn’t you rather eat something fresh?”

He put them into old water bottles with spouts for drinking. He left the spouts up to give them air and placed these inside his air-conditioned car. He lives on a ranch with a pond, so my slimy friends with have a great new habitat. In this regard, I also learned that snakes tossed into the neighbor’s yard is never a good idea for many reasons (I’ll let you think of a few possibilities on your own), but especially because snakes moved close to their den will usually return.

I said I’d try to be brave and catch one but couldn’t find a single snake. Hunter offered to free one that he’d caught. I declined. Then said if I got good at catching snakes, he’d offer me a job. Declined again.

“But why?” he asked. He then explained that there are plenty of gardens whose owners are not fond of garter snakes (he looked kind of sad). Even so, he gave me a tip: pillow cases make good containers when catching harmless snakes—just don’t forget to hold the top closed until they are taken to their new home. That said, garter snakes are beneficial since they eat things you definitely don’t want nibbling on your veggies. And they’re really (okay, I’ll say it) sort of cute.

As I sat on my porch stoop, I watched one dip its head into a puddle of water. Snakes get thirsty too! And when it noticed it had an audience, it flicked its tiny red tongue out at me. Garter snakes have round eyes and this one watched me with interest almost as long as I watched him. 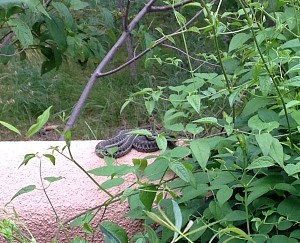 In Judeo-Christian history, the serpent deceives the first woman and is later crushed for his crime.

In fact, in most cultures the snake is typically a sign of some sort of trouble. But there are exceptions.

The Arapaho have a beautiful a creation story: At a time when the earth was covered with water, a certain man understood that things would be better if there was land, so he asked many animals to help him, including a garter snake. To read the full story, click HERE.

Conversely, the Hopi perform a ceremony to call water down from the skies. To see photos of snake priests and of the Hopi Snake Dance, click HERE.

Finally, while researching American history specific to Indians, I found an interesting quote. In the year 1711, in North Carolina, Christopher von Graffenried had been captured by the Tuscarora. After his release he was questioned about any cruel treatment he received. In response, von Graffenried quoted an Indian “king” who used the example of a snake.

“If one leaves it in its coil untouched, quiet, and uninjured, it will do no creature harm; but if one disturbs and wounds it, it will bite and wound.” To read more of his story and others from the National Humanities Center, click HERE.

If you found a snake in your garden, what would you do?

One Response to “Garter Snakes in My Garden”

Leave a Reply to Sharon