I bought a one-way ticket because I did not know how long I would be needed. A couple of weeks? Three? Could I leave and come back? My siblings who live closer and who had been caring for him needed a break to take care of their own families and business. And I wanted to be there.

When I arrived that Saturday, he said, “Hi-ya Amy. You know what I got, don’t you?” Sadly, I was with my father only about 48 hours before he died. Diagnosed with a fatal form of cancer in August, and barely two months later …

As I remember it (surreal as the event, I may have some details out of order), it was about 8am on that Monday morning when I tried to give him his medicine (he was at home in a bed near the picture window so he could watch the birds, racoons, skunks, deer … his cat named Cat), but he could not swallow. Yet the day I arrived, he was swallowing and drinking his beverages through a straw. On Sunday, he was swallowing but having difficulty using a straw, so a syringe was used to give him water, which he asked for often. That day, the hospice nurse came to show me how to care for him by turning and bathing and bending his legs. Her support and care was amazing. In the short time she was with me, we both cried.

Eight o’clock Monday morning, I tried to give him his medicine, but an entire pill was simply too large. The nurse had shown me how to pulverize and mix the medicine with a bit of water and place it in a syringe. I know how awful a pill can taste, so I added some watermelon flavored syrup and gave him a little bit. I decided that I would keep giving him those tiny amounts even if the procedure meant I never left his side.

My mom was sitting next to him, telling him very sweet things. “You’re my hero,” is one I remember her saying several times. She was holding his hand. 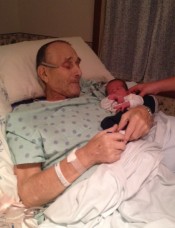 I had put powder on my own hands then, so they would easily slide under his back when I gave him a back rub. I also rubbed the back of his head which he seemed to appreciate. Through all this, Mom never moved from his side. Then I got my camera and said, “Mom, you look so sweet there with Dad. Can I take your picture?” She smiled for the camera. Dad kept his face turned toward hers.

I gave my dad another dose of medicine—a dribble really. By then, several of my siblings were there, and one of my sisters was on the phone to contact the rest. I put more powder on my hands, and while getting ready to rub Dad’s back again, he simply stopped breathing. It doesn’t make sense, but when that moment comes, you’re never ready even if you’re prepared. I took him by the shoulders and told him to breath! And he did! Once more. That is all.

The family stayed by his side until he was taken away. I remember that time very clearly. It was a beautiful autumn afternoon, windy, leaves blowing. We followed the cart that led Dad outside and everyone of his children that was there stood in their own space, mourning in their own way. One of my brothers placed a bundle of canna lily he had cut from Dad’s garden on Dad’s body before the door was closed.

One thing more: The night before he died, I heard my dad say, “Is Andy at the table?” I thought it was odd, that maybe he was dreaming. But now I am convinced that my grandfather, Andy, was seated at a table in heaven waiting for his son-in-law to join him. And Dad, still in that corridor between heaven and earth could not see everything on the other side. In Revelation 3:20, Jesus says, “Listen! I am standing at the door knocking; if you hear my voice and open the door, I will come in to you and eat with you, and you with me.”

My dad died on October 27th, Andy’s birthday. My guess is that there was a cake. And other family—Dad’s brothers, his sister—friends … and yes. Andy was at the table. 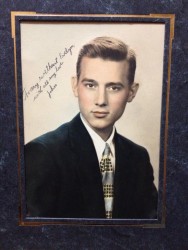 4 Responses to “A One Way Ticket Home”